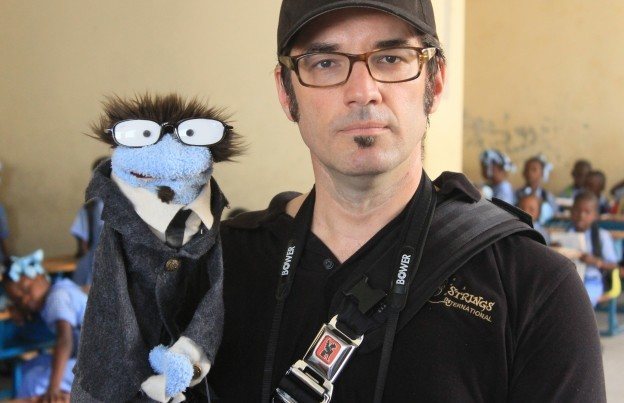 Tim is a filmmaker, puppeteer, and designer / fabricator, whose credits include Sesame Street, Between the Lions, Oobi, Blue’s Clues, It’s a Big, Big World and Chappell’s Show.  He received two Emmy nominations for the series of short puppet films he created for Between the Lions, and has taught puppetry at the Lincoln Center Foundation, UConn, the O’Neill Theatre Center. He latest project sees him as puppet star of Disney’s Crash and Burnstein.

Tim is one of the No Strings puppet training team, playing a key role in a two-week workshop in Haiti in April 2012.

Here, Tim with his puppet doppelgänger at a school in Port-au-Prince. Who talks almost as much, and nearly as fast …
Visit Tim’s site