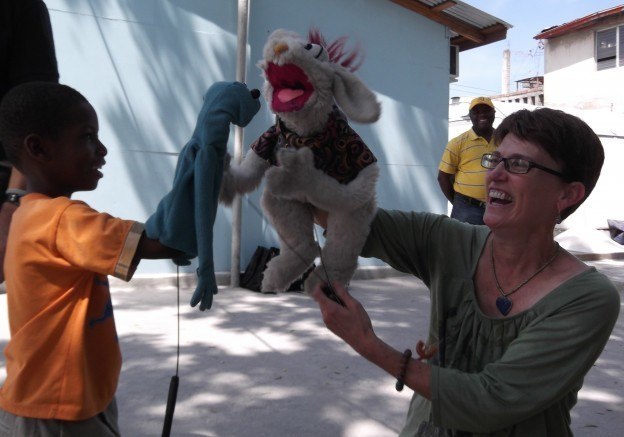 Lisa Buckley is an accomplished puppeteer with over 25 years’ experience, and leads the puppet training side of the No Strings in-country workshops.

She has worked on countless stage productions, movies and television shows including Alf, Men in Black, and Sesame Street. Lisa’s expertise as a performer, character designer and builder has allowed her to travel to numerous countries around the world including Haiti, Kenya, Philippines, Cambodia, Iceland, South Korea and Ireland.

For the past six years Lisa has been involved with No Strings International, as one of the principal puppet performers on the No Strings films.

She is equally excited by her work co-facilitating the No Strings workshops overseas, training local teachers and facilitators in ways to make learning come alive, leading discussions and demonstrating the building and performing of puppets.

Lisa also has +200 Hours in certified yoga training with a concentration in trauma and children’s yoga.

Above, puppet play with a little boy with hearing difficulties at a Port-au-Prince children’s centre in Haiti.