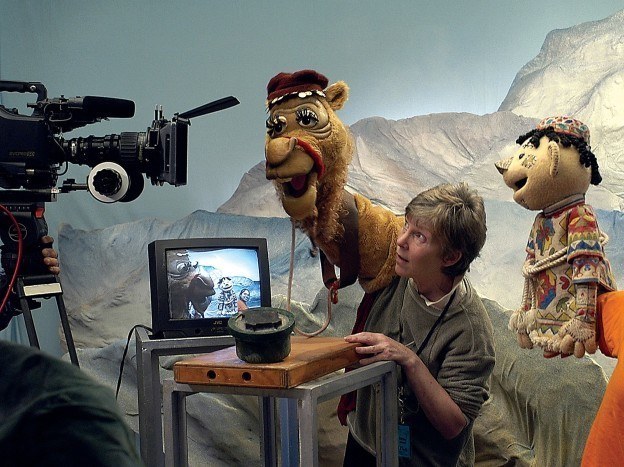 Kathy Mullen with Jim Henson and Kermit during filming of The Muppet Movie. (c) All Rights Reserved, The Walt Disney Company

Kathy is a long-standing force of nature in television and film puppetry, and a blast of energy, inspiration, wisdom and enormous creativity on No Strings productions, which she leads.

She was first hired by Jim Henson in 1978 as a puppet builder and background puppeteer on The Muppet Movie, then joined the cast of The Muppet Show, where she was a principal performer for 10 years. Kathy performed the heroine, Kira, in the Henson fantasy film The Dark Crystal, and played Mokey Fraggle and Cotterpin Doozer on Fraggle Rock.

After leaving the Muppets, Kathy played the title role in the Nickelodeon series Allegra’s Window, then returning to Henson Productions in 1996, she puppet captained and performed on the Nickelodeon series The Wubbulous Word of Dr Seuss, where she began directing as well. In 1998, Kathy helped to create the PBS literacy series Between the Lions, where she performed one of the main characters, puppet captained, wrote and directed.

For Star Wars fans, her most impressive credential is perhaps having worked alongside Frank Oz to puppeteer Yoda in The Empire Strikes Back (more on which here).

Kathy Mullen is a co-founder and artistic director of No Strings, and the lead script writer and researcher. She is involved in our film-making process from beginning to end, bringing in New York’s best artists, puppeteers and technical people, and guiding them from pre-production through the edit and completion of the film.