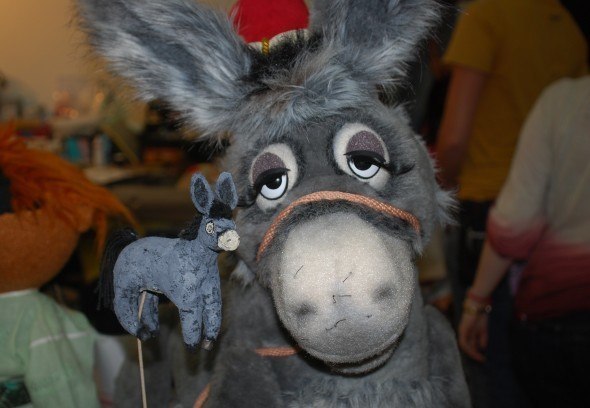 They don’t come more loveable than Jala, donkey hero of our trauma-healing and peace films for children affected by war and intergroup conflict in Syria and the Middle East.

In Out of the Shadows, it’s Jala who lures little Sera from out of her shell and provides a source of comfort. At the end of the film as he makes his departure, Sera is ready to form closer attachments to her aunt and cousins, and begin a more positive future. Here he is backstage with Sera’s one possession, the donkey toy she brought from her home after her parents were killed.

Jala arrives in the midst of the Red Top, Blue Top action bedecked with amulets and potions and wonderful trinkets, adding to the sense of other-worldliness around the Wise Man who has come to help the villagers see that they are much more similar than they are different.